Support the filibuster of Alito

On another note, Oprah and Frey. Finally.

Maureen Dowd was on Countdown with Keith Oberman discussing and she reported that the NY Times newsroom was riveted, as was I. I'll post the link to the transcript when available. She of course lobs off a few zingers on Bush and his repulsive spontaneous press conference today (which pre-empted Oprah in some major markets, including Chicago). A subsequent guest, Seth Mnookin of Vanity Fair, spoke of his concern that readers didn't feel betrayed even after the smoking gun report and that the made up facts didn't matter to them because the central truths still resonated with them. He believes the reason that the central truths "still spoke to them" is because its a book in which every character is a cliche and so the tale (lie) feeds into people's preconceived notions about addiction and treatment. A book is popular and resonates and sells thanks to its cliches. Ugh.

Nan Talese the publisher at Doubleday made clear that the industry only cares about not being sued - not about the truth. Nice civic responsibilty.

In case you missed the excellent perspective Kakutani, the New York Times reviewer, added to the debate, you can read it here. (I had a hard time finding it). She takes swipes at the right and the left and touches on the problems I had with postmodernist thinking I encountered in law school. She also hints at what I see is the Democrats handicap in dealing with Bush. Bush has co-opted very effectively the impossibility of objective truth. That idea invaded, to much detriment, literature and history departments in universities across this country decades ago and is now entrenched. My frustration with my professors at Vassar who embraced this relativistic outlook is what deterred me from a profession in academia. Bush has hung the left on its own petard, and I don't sense that's even percieved yet.
Posted by Cassandra Marcella at 1/26/2006 08:48:00 PM No comments:

Difference between television mogul and novelist

I caught that bit on Angela Carter's fairy tale on my way to read a review in the TLS of Rick Moody's latest bit of fiction, The Diviners. That's where I was going. But these detours are one of the pleasures still of holding a paper in my hand. Your eye catches unexpected treasures on the way to your destination.

Moody's perceptive essay last year in the Atlantic Monthly on the problems of teaching fiction in this country so resonated with many of my disappointments of the Hopkins' Masters of Writing program that anything Moody writes is now of keen interest to me (well, until Angela Carter's fairy tales get in the way).

So I finally made it to my original destination today - the review was favorable. If anything, the reviewer thought the language too precious - which is not an element of fiction that bothers me. There was this enjoyable bit: "...language is Moody's forte: the difference between a television mogul and a well-regarded novelist is that the former can use the words 'news-related mythologies' without thinking; while the latter can't use them without laughing." I've been loathing television news reporters lately and their ez passes on the government and the inept way the frame the issues, and escaping into novels where I find myself much more at home. I prefer to laugh than cry.
Posted by Cassandra Marcella at 1/26/2006 08:25:00 PM No comments: 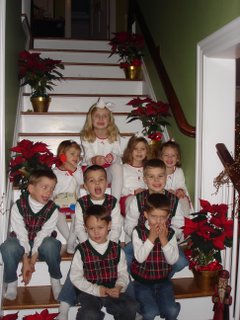 Okay - just to see if I could, I've posted a photo. This Christmas picture features my wonderful nieces and nephews - future voting Democrats all! Note that the youngest, Ava, is holding a red telephone to her ear - my present to her. She's much like her mother.

Today I read a review of Angela Carter's anthology of fairy tales in the TLS (Times Literary Supplement). I learned that the word "tale" is often synomous with "lie" or "falsehood," which made me think of "A Lie of Two Cities." Russian narrators end their tales, "The tale is over; I cannot lie any more." The reviewer reminds that fairy tales were not meant for children and were very dark with brutality and grief. These stories were often told over generations, "old wives' tales" and the women are broken, the heroines wounded - but in the narratives they undergo some sort of transformation. The reviewer does not compare Carter's collection favorably to the Grimm's or Anderson, saying simply that the stories here are not art. A.S. Byatt said of Anderson that he had "designs on the reader" and in concocting his fables his designs entice the reader, presumably in ways the stories here do not. To read the full review click here.