Portraits of Obama From His Past

This piece covers new territory for me, and I've read a lot about Obama. I really recommend the whole piece in the British paper, The Guardian, called Obama As We Knew Him...Man and Boy.

For me, this was the funniest segment on Saturday Night Live this weekend:

How the Vet Didn't Vet

This is hilarious - "I want to fly into your airspace"  The mispellings are cute.  The wonderful thing about the internet is how small it makes the world.   It's wonderful piece of fun.  Check it out (they look like pasty Brits! and are just about as funny).

Opie Endorses Obama (along with the Fonz and Sheriff Andy Taylor)

It's how far in the memory the gestures and inflections of these beloved characters are - Ron Howard as Opie and then Cunningham. The Fonz talking about Palin is priceless.

Best Electoral College Analysis Out There

I just spent 3 hours looking for this web site. Shame on me for not bookmarking it, or posting this when I found it in September. IT IS GREAT.

It's basically a summary of all the news sites' analysis of the electoral college. The page is very helpful to get a sense of where things stand in the Electoral College.

Of interest to me were these excerpts -

not long after Biden ended his own Presidential campaign, Obama approached him to ask for his support in the remaining primaries. Biden is close to Bill and Hillary Clinton (she once told him, “I think you and Bill were separated at birth”), and he said that he would stay neutral until the nomination was settled. “If you win, I’ll do anything you ask me to do,” Biden told Obama. Obama replied, “Be careful, because I may ask you a lot.” They had another conversation in February, and Obama continued to cajole him. “The only question I have is not whether I want you in this Administration,” Obama told Biden. “It’s which job you’d like best.”During the primaries, which continued until June, Obama and Biden spoke about twice a week. “He’d call not so much to ask for advice as to bounce things off me,”

I like this, which demonstrates Obama's interest in pragmatism and how to get things done:

The conversation in Minneapolis ranged from foreign policy and possible appointments to the federal courts to the legislative strategy that would be needed to pass an Obama agenda. Obama wanted to know how Biden had managed his signature achievements—such as the 1994 crime bill, which added a hundred thousand federally funded police officers to city streets.

And then this (emphasis mine)

he official story behind Obama’s Vice-Presidential choice is that Obama was won over by Biden’s ability to get support from Republicans in the Senate. In Biden’s telling, Obama liked his sense of empathy, a trait that Obama shares, to judge by the finely sketched characters in “Dreams from My Father,” his 1995 memoir. Biden told me that Senator Mike Mansfield, of Montana—who persuaded him to stay in the Senate in 1973, when he was distraught over the deaths of his wife and child—taught him that, no matter how reprehensible another senator’s views, his job was to figure out what was good in that person, what voters back home saw in him. It may be a sentimental view of how senators treated each other in an earlier age, but Biden suggested to me that when he repeated that to Obama it helped to bring them closer—and he said that he and Obama would bring that approach to Washington.

And the reason Biden is long beloved by me:

As a longtime chairman of the Judiciary Committee, Biden was at the center of many of the hard-fought debates of the culture wars, and many conservatives still resent him for leading the fight against Robert Bork, Ronald Reagan’s nominee for the Supreme Court. Bork, a strict constructionist, expressed his views freely, and Biden had little trouble using Bork’s past opinions to embarrass him.

This is also helpful:

By 2002, Biden’s brand of liberal interventionism was the consensus view among foreign-policy élites in the Democratic Party. During the 2002 Senate debate over the Iraq-war resolution, Biden occupied the political space between Bush Administration unilateralists and antiwar Democrats. He pressed for a resolution that would have allowed the President to use force only to disarm Iraq. (In the end, Biden’s proposal was undermined by Democrats who supported Bush’s version of the war resolution.)

Why I Love Dancing With the Stars

Perpetually fretting Democrats will not want to accept it. The campaigns themselves can't afford to believe it. Many journalists know it but can't say it. And there will certainly be some twists and turns along the way. But take it to a well capitalized bank: Bill Ayers isn't going to save John McCain. The race is over.

He says Bill Ayers attacks won't work (I'm not so sure). Wolfson calls such attacks smallball. And concludes with the big picture:

Just as President Bush's failures in Iraq undermined his party's historic advantage on national security issues, the financial calamity has shown the ruinous implications of the Republican mania for deregulation and slavish devotion to totally unfettered markets.

Republicans and Democrats have been arguing over the proper role of government for a century. In 1980 voters sided with Ronald Reagan and Republicans that government had become too big and intrusive. Then the economy worked in the Republicans' favor. Today the pendulum has swung in our direction. Republican philosophies have been discredited by events. Voters understand this. This is a big election about big issues. McCain's smallball will not work. This race will not be decided by lipsticked pigs. And John McCain can not escape that reality. The only unknowns are the size of the margin and the breadth of the Democratic advantage in the next Congress.

We shall see. I'm not as confident. 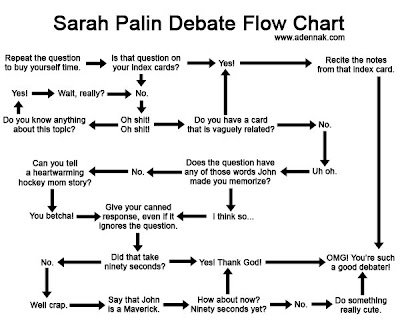 "One of my fascinations about my own life is that every now and then I see a thing that unravels as if an artist had made it. It has a beautiful design and shape and rhythm. I don't go as far as some of my friends, who think that their whole life has been one great design. When I look back on my life I don't see it as a design to an end. What I do see is that in my life there have been a fair number of moments which appear almost as if an artist had made them. Wordsworth, who affected me a great deal, had this theory about what he calls 'spots of time' that seem almost divinely shaped,"