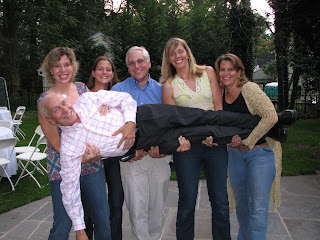 The party was outside and the air was very hot and humid. Her husband John did a wonderful job and even bought his first pair of designer jeans for the affair (a shopping expedition to the Short Hills mall that included their 4 children, such was the event). No children at the party, though Bea and John's kids were allowed up past their bedtime - until 10 pm. I've no doubt they'll remember the night the rest of their lives, as I still remember my father's 40th.

I'm going to begin again this blog. The site has since been bought by Google. And my mom died in November. Her diagnosis in February 2006 is the main reason I've halted. But I aim to begin again and to do more that just blah blah blah about my life. I hope to add in reviews, political stuff as the campaign gears up, and perhaps even some tales from the online dating front.